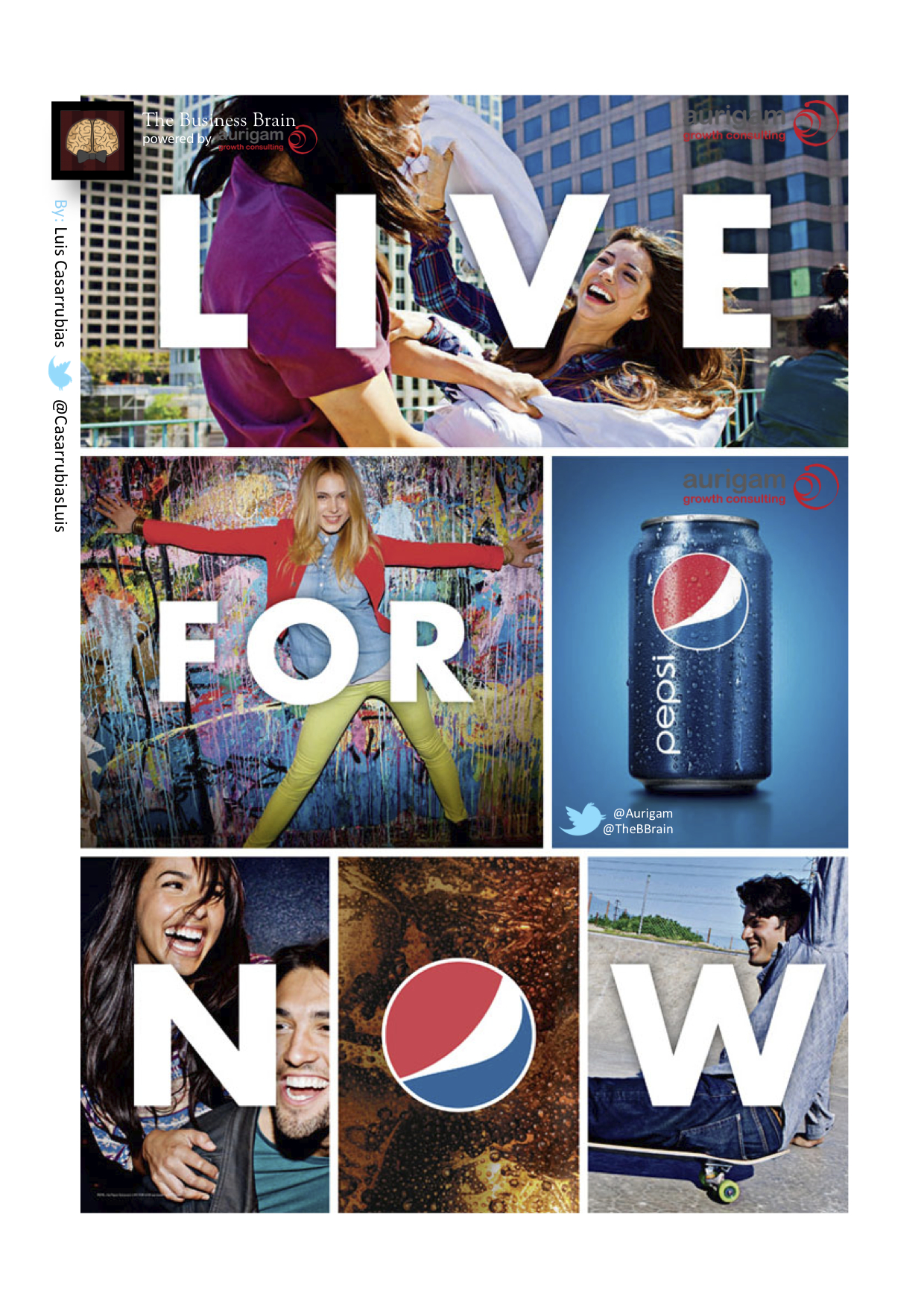 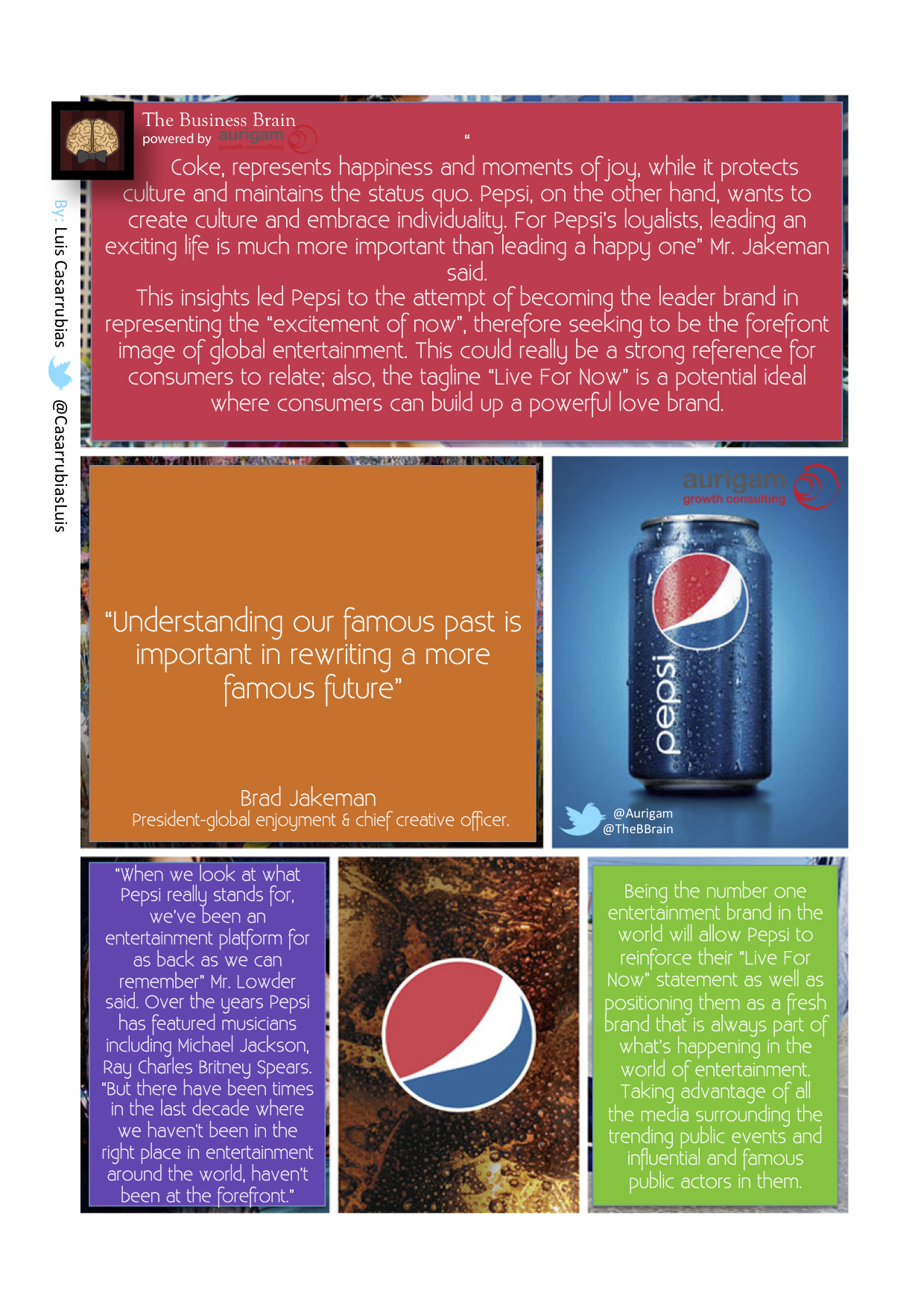 So long for a brand with no clear sense of who to be, who its consumers are and, most concerningly, what is the role to play in consumer lives. No more moving from one advertising campaign to another. No longer Pepsi will lack an enduring piece of brand language.

At least, this is what Pepsi’s ambitious marketers are promising.

After 9 months of intense research, Newcomer Brad Jakeman and veteran Simon Lowden, discussed how to turn Pepsi into a single voice, working on its positioning and charting a new course for the brand…

“While we might not be the leading cola, we have always behaved like we were. This is a brand that, when it’s at its best, has the confidence and swagger of a leader.” – Brad Jakeman, President-global enjoyment & chief creative officer.

“Our least-impactful marketing has been when we’ve tried to reinvent this brand. This brand does not need to be reinvented. It needs to be reignited”, Brad Jakeman says.

Taking care of your brand consistency builds up an overall brand personality that protects your positioning in the market. Pepsi is finally aware of this.

For too long consumers have watched an ever changing set of slogans, logos and advertising from this brand. Pepsi needed to find what to represent and be consistent about it.

What does this brand  been representing through all these years? What idea could be strong enough in order to transform Pepsi from a timely brand to a timeless one?

“Coke, represents happiness and moments of joy, while it protects culture and maintains the status quo. Pepsi, on the other hand, wants to create culture and embrace individuality. For Pepsi’s loyalists, leading an exciting life is much more important than leading a happy one” Mr. Jakeman said.

This insights led Pepsi to the attempt of becoming the leader brand in representing the “excitement of now”, therefore seeking to be the forefront image of global entertainment. This could really be a strong reference for consumers to relate; also, the tagline “Live For Now” is a potential ideal where consumers can build up a powerful love brand.

“When we look at what Pepsi really stands for, we’ve been an entertainment platform for as back as we can remember” Mr. Lowder said. Over the years Pepsi has featured musicians including Michael Jackson, Ray Charles Britney Spears. “But there have been times in the last decade where we haven’t been in the right place in entertainment around the world, haven’t been at the forefront.”

Being the number one entertainment brand in the world will allow Pepsi to reinforce their “Live For Now” statement as well as positioning them as a fresh brand that is always part of what’s happening in the world of entertainment. Taking advantage of all the media surrounding the trending public events and influential and famous public actors in them.

Live For Now may seem Pepsi’s natural brand transition to strengthen its connection with global entertainment; but how will they be able to communicate and transmit this concept effectively?

“The new positioning injects new energy into not only the brand but the people who work on it, giving them a license to experiment with ‘exciting new initiatives’”, “Who doesn’t want to work on a brand that promises to capture the excitement of now?” – Richard Lee, CMO-PepsiCo China.

This is Pepsi’s clear effort to return to leading consumers rather than tapping into trends. This is not an easy job, as VP-marketing India, Ms Warrier explains: Pepsi will need to invest in capability, in foresights and dynamic trend-spotting, design and creating social communities.

Now its time to observe if the ambitious new social platform, Pulse, does not falls short to help on the even more ambitious challenge of spreading the conception of Pepsi globally representing “the notion of making the most of every moment”. The intense research gave Pepsi a crucial creative and strategic knowledge output, but the process of applying it to a global campaign and curating it through the years is much more challenging.